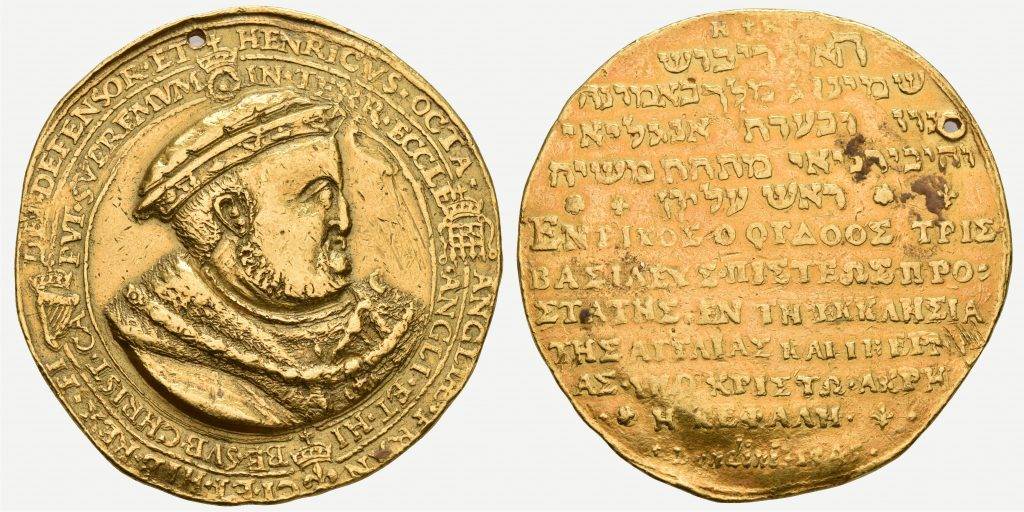 The Supremacy medal is a very rare English gold medal minted in 1545 by the King Henry VIII. It commemorates his assumption 10 years earlier of the Title of Supreme Head of the Church of England.

This video is also available in French and German

The Supremacy medal in your hands

The Supremacy medal and its era

For centuries, medals have been used to serve numerous purposes:

As awards, they were given in recognition of superior achievements or loyalty. As souvenirs, they commemorated special events or important persons. As devotional objects they expressed and propagated the spiritual values of their time.

This very rare gold medal served all these purposes, but it did even more than that. It was a loud statement, struck in gold, that would for centuries reshape the English society.

The Supremacy medal was minted in 1545 by the English King Henry VIII and commemorates his assumption, 10 years earlier of the Title of Supreme Head of the Church of England.

This medal, also known in silver, was intended to be given out as a diplomatic gift, stating and promulgating the new and prestigious title of the King. But it might also have been handed over, probably by Henry VIII himself, as an award to an important and loyal supporter, as some characteristics of our medal suggest.

What is very interesting is, that our specimen is pierced, suggesting that it might have been proudly displayed or worn as a pendant by the recipient. The bust of the King, as the position of the hole suggests, being shown in priority.

With this in mind, we can imagine the important status of the recipient of such a valuable medal, and what he could have experienced, being in close contact with one of the most tumultuous and feared kings of England.

On the obverse, you can see the bust of the King, late in life, to the right, wearing a cap and a richly adorned coat.

On the reverse, two successive inscriptions, one in Hebrew and one in Greek, proclaiming the new title of the King, as well as the date and place of minting.

What makes this medal so exceptional is that this specimen is one of only five known to exist in gold, four of which being held in museums.

In other words and to the best of our knowledge, this medal is unique, as it is the only specimen in gold in private hands available on the market.

As already mentioned, this medal commemorates the assumption by King Henry VIII of the title of Supreme Head of the Church of England, a decision that will mark the end of half a millennium of relation with the Pope and the Western Church. It therefore marks the begin of the English Reformation, which over the following centuries, will evolve into the Anglican Church as it is known today. 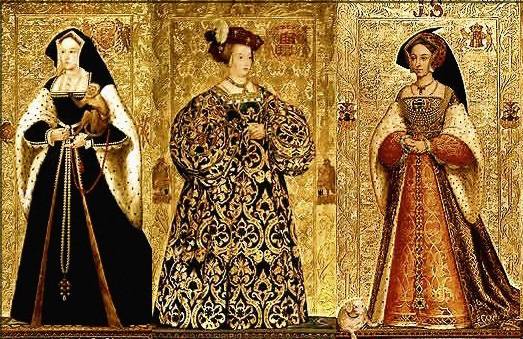 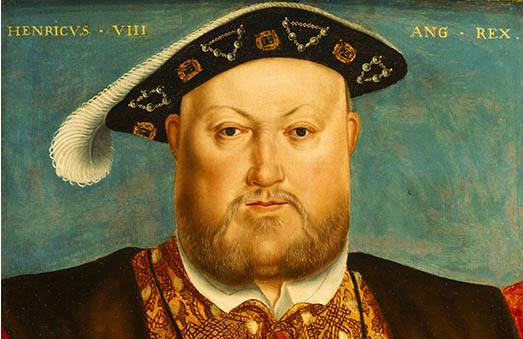 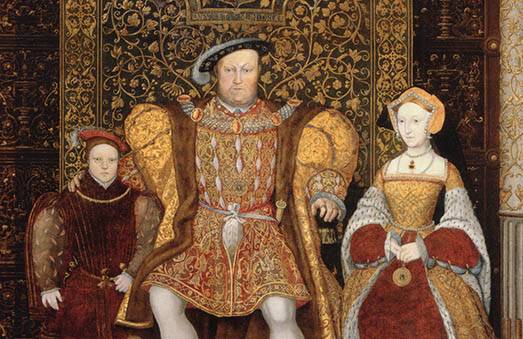 But this medal is much more than a religious medal, as it commemorates an event whose consequences are far beyond any doctrinal questions.

On a political aspect, the Title of Supreme Head of the Church of England gave Henry VIII a divine legitimacy to establish his power and the Tudors as the ruling dynasty of England. By allowing him to divorce from his first wife Catherine d’Aragon, it gave him the mean to undertake his insatiable quest for a male heir. Tragically, at the cost of the lives or the heads of his five following wives.

On an economical aspect, the dissolution of monasteries undertaken by the king following its assumption was the largest privatisation ever in the history of Britain. It gave him access to an immense fortune, becoming in one blow and by far, the most important landowner of England. And it may well be that the gold used to make this very medal might have come from the melted down riches of a disbanded monastery.

On a social aspect, this medal marks also the birth of the modern English society. In an attempt to protect himself from a hostile nobility, Henry VIII promoted the Parliament and surrounded himself with talented self-made commoners. His most important advisors, Thomas Wolsey and Thomas Cromwell where respectively the sons of a butcher and a Blacksmith.

In addition, by giving – for the first time – the possibility to the middle class to purchase land from the disbanded monasteries, Henry VIII reshaped a society dominated for centuries by the Nobility and Clergy creating in doing so, the new social class of the British Landed Gentry.

Compared with contemporary medals of the Italian, German or French Renaissance, this medal seems to be of lower artistic merit. And this is quite surprising, considering the importance of the commemorated event, the high intrinsic value of this gold medal and the fact that Henry VIII himself, was one of the most important art collectors of its time.

But in order to understand this medal, we have to remember that most continental Renaissance medals of the time were produced by way of casting. A technology allowing high relief representations but whose most talented artists where Italian and French.

And because of the very event that this medal commemorates and the political decisions of Henry VIII, these artistes were out of reach.

So, if we want to be fair to Henry Bayse, the supposed engraver of this medal, and judge its artistic merit justly, we must compare it to the medals and coins of that time produced by the same way of striking. And when we do that, we realise that this medal, was actually a real artistic prowess and a very ambitious project: producing by way of striking, the only technology available in England at the time, a Renaissance portrait medal with intricate details and hight relief.

The portrait on the obverse is so realistically made, that it reminds at a glance the well-known portraits of Henry VIII by Hans Holbein the youngest.

We can even imagine that the engraver used one of Holbein’s paintings as a model for this medal.

Although less impressive, the reverse played an important role in the symbolic power of this medal.

The use of both Greek and Hebrew inscriptions to proclaim the assumption of his new title, was intended to show off, that the king was an educated ruler of its time.

A time, when the desire to return at the origins of the holy books, the Hebrew for the Ancient Testament and the Greek for the New Testament, will mark the turning point of the religious Reformation in Europe.

This medal is considered as the first English commemorative medal ever minted.

Its weight and value are almost five time higher than the Sovereign, the largest English gold coin struck at the time.

It is also, along the coins produced by Henry Bayse, a milestone in the iconography of the English coinage as it marks the end of a four centuries long tradition of idealised representation of the ruler as a Medieval king and by doing so, it marks the begin of its representation as an individualised modern monarch.

A medal with prestigieous provenance