The medal of splendour

This gold medal was made somewhere between 1610 and 1614 for Marie de’ Medici, the mother of the French King Louis XIII when she was Queen Regent of France. It is attributed to the famous sculptor and medallist Guillaume Dupré.

This video is also available in French and German

The medal of splendour in your hands

The medal of splendour and its time

Medals have always been used as a mean of communication and propaganda. They represented an advertising tool, intended to convey with its iconography and legends an explicit but sometimes also subliminal political message.

When produced by a good medallist, portraits on the obverse were intended to give a realistic representation of the physical aspect of a person. But when they were realised by an exceptional artist, as it is the case here, medals represented more than a realistic portrait, they were a true mirror of a person’s soul.

This medal is a masterpiece of medallic art, the unique result, cast in gold, of the meeting of a brilliant artist of the early 17th century and one of the most ambitious Queens of France.

This gold medal was made somewhere between 1610 and 1614 for Marie de’ Medicis, the mother of the French King Louis XIII
when she was Queen Regent of France. It is attributed to the famous sculptor and medallist Guillaume Dupré.

On the obverse, we can see a very elaborated portrait of the queen to the right.
On the reverse, a cockerel picking seeds from an open pomegranate in a countryside scene.

What’s really exceptional is that this medal is unique. To the best of our knowledge, it is the only specimen known to exist in gold and it is missing in all important Museum collections worldwide. 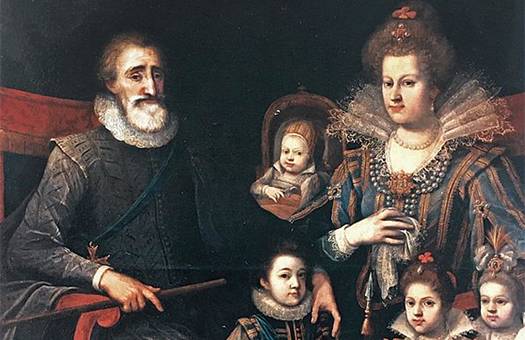 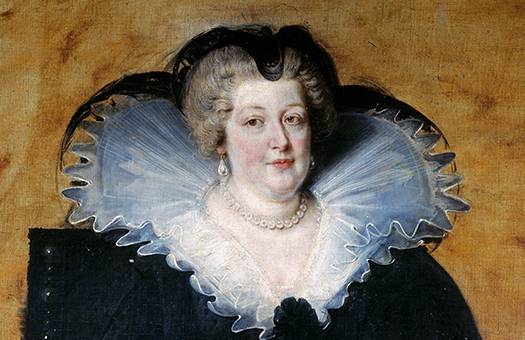 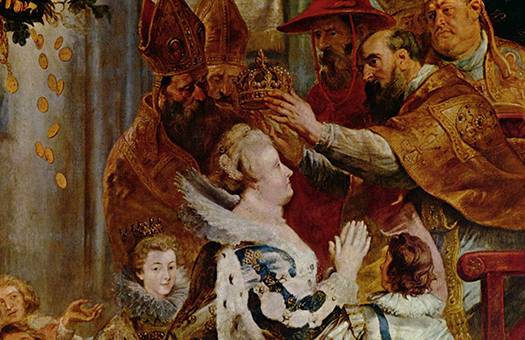 As we have already mentioned, this medal is attributed to Guillaume Dupré, the most reputed French medallist of its time, an artist recognised for having led the French medallic art to its climax.

The importance of his legacy for numismatics and the medallic art is illustrated, in addition to his impressive work, by the fact that the most magnificent reception room of the building of the Monnaie de Paris, the historical siege of the French Mint, was named after him.

In 1611, under the regency of Marie de’ Medici, Dupré became Premier sculpteur du Roi, reaching so the highest position available as the official sculptor and medallist of the royal family. And this explains why Guillaume Dupré made so much effort in the creation of this medal.

What’s really interesting is the fact, that he was among the first artists to be placed upon royal support in the Gallery du Louvre built by Henry IV in Paris. It was there, in very close proximity to the royal family, that his workshop and furnace where located and there that this medal must have been produced.

Written sources of the time even tell how the Dauphin Louis, future King Louis XIII, enjoyed playing inside the Gallery and how he learned to model clay with Dupré.

And with this in mind, we can imagine the atmosphere of artistic creativity that must have reigned it the Gallery du Louvre, where the workshops of the most talented artists of the time were located under the sponsorship of the royal family. A creative hub that gave birth, among other masterpieces, to this beautiful medal. 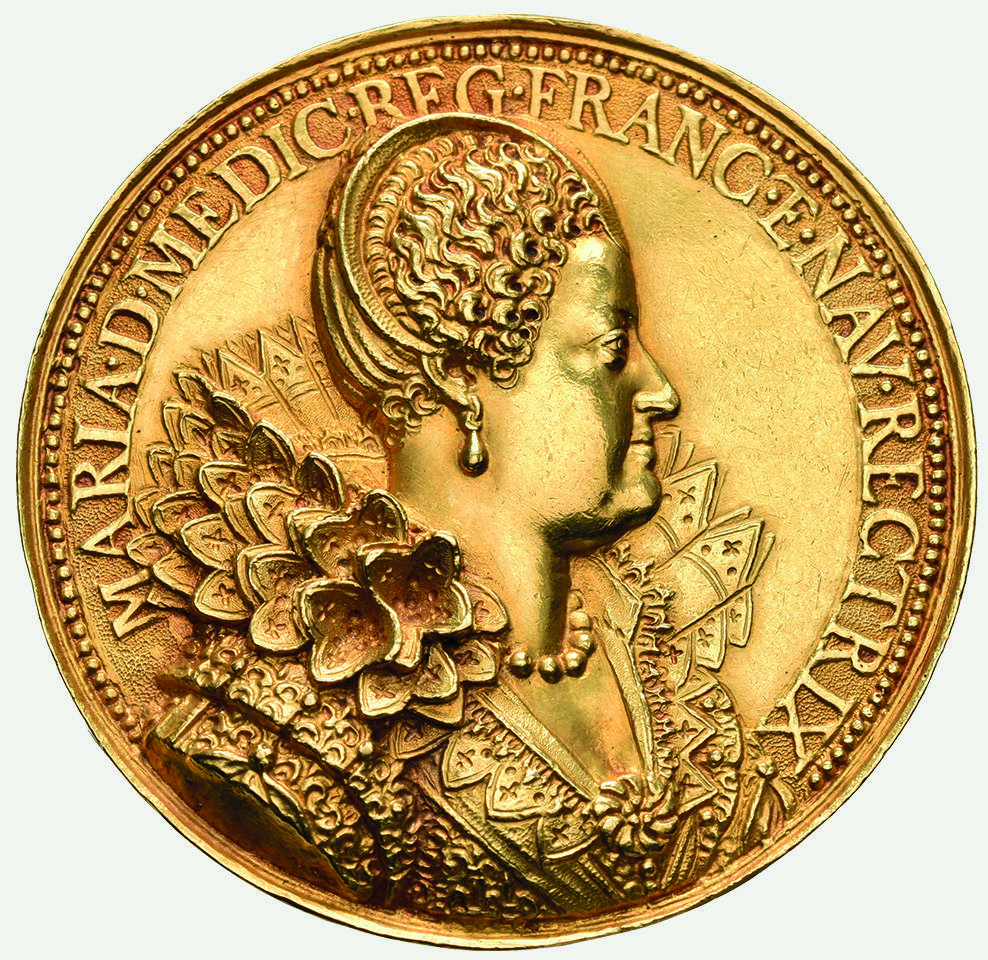 What makes this medal unique and so attractive, is the very high relief of the portrait of the Queen Regent on the obverse and the great details in the representation of her rich adorned closes and her elaborated hairdressing.

Looking closely at it, we can see that the artist chiselled the smallest details of the costume and lacework in order to give an impression of richness and emphasise the fineness of the medal.

Such a high-quality medal could only be achieved by a master in the art of casting like Guillaume Dupré was, especially if we consider that gold is a very difficult metal to cast.

It can therefore be seen as an extremely rare testimony of the exceptional skills of French artists of the early 17th century.

But as a cast medal, it is also, among other medals of Dupré, one of the last testimonies of the Renaissance Medallic Art, born in Italy more than a century earlier. An art that made the joy of so many important and magnificent monarchs of the time.

The exceptional portrait of Marie de’ Medici on the obverse, is a perfect illustration of the spirit of this very ambitious and hot-tempered woman. When we look at her, there are three aspects of her personality that come to mind:

The first aspect is her origin –
‘splendorous Florentine’

Born in 1575 in Florence as the sixth child of the Grand Duke of Tuscany, Marie de’ Medici was raised in great wealth.

Considered as the richest heiress in Europe after the death by poisoning of her father and his mistress, she was married to the French King Henry IV in 1600.

And because the main motivation for this marriage was the very important dowry she was bringing to the French King, it led to her mocking name ‘la grosse banquière’ or ‘the fat banker’ received upon her arrival at the French Court.

The second aspect is –
her insatiable political ambitions

Here, we can admire Marie de’ Medici at the highest point of her political life, ruling the French kingdom as Queen Regent for her son Louis, still too young to rule. A leading position she had ambitioned to occupy for a long time.

While she had to wait 10 years after her marriage to Henry IV to be crowned Queen of France in 1610, she only needed to wait one more day to become Queen Regent, as the king tragically died, assassinated on the very day following her coronation.

A sequence of event that led to numerous rumours about her possible implication in the death of her husband and resulted in a lack of legitimacy of her regency.

Therefore and in order to assert her fragile position, she decided to use wealth as the basis of her legitimacy and policy and expressed it in every aspects of her image. And this is why her portrait on this medal is so opulent, as were also her painted portraits, especially the ones made by the painter Frans Pourbus the Younger.

But this insatiable ambition will soon become the source of numerous conflicts with her son. At the end of the regency in 1614, she refused to hand over the crown to her son, now in age to reign.

It will only be three years later, in 1617, that Louis XIII will be able to take his crown back by using force and after having banished his mother from the court. Her insatiable ambition will even lead Marie de’ Medici to raise an army against her own son to overthrown him and replace him by his younger brother Gaston.

Finally, it will be her insatiable ambition that will lead her to be banished a second time in 1630 after a reconciliation with Louis, but this one for good as it will be the last time she would see her son ever again, until her death 12 years later in 1642.

The third aspect is –
her immense ego

This medal is also am illustration of the fact that Marie de’ Medici knew, in the Medici tradition, how to mobilise the arts to celebrate her greatness and serve her politics. A strategy illustrated in the well known series of 24 Paintings she ordered to Peter Paul Rubens, the famous Flemish Baroque painter, to decorate her newly built palace, le Palais du Luxembourg.

This medal can be seen as a condensed representation of this opulent and ambitious queen and there could not be any better metal than gold and a most talented artist than master Guillaume Dupré to create such a suitable medal to such a strong woman. 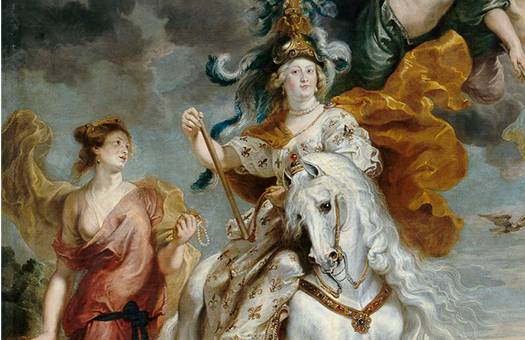 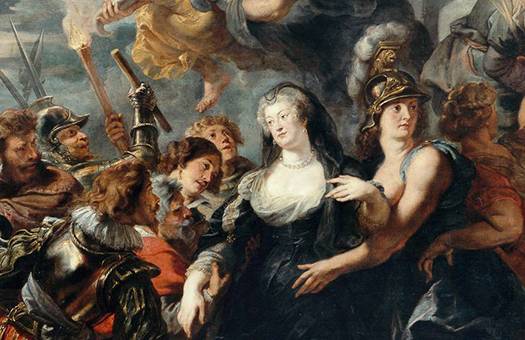 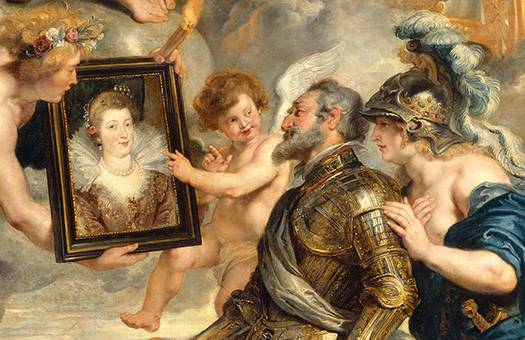 A medal with prestigeous provenance